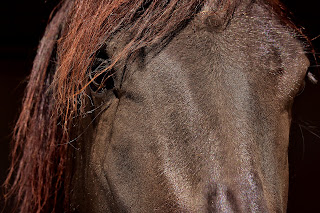 Equine extra’s new contributor has been warmly welcomed, with her experience, wit and wisdom giving an entertaining insight into the life of a semi-retired, very successful competition mare.
Dinah is 19 years old now, still a ‘full up’ 16.1hh and immaculately turned out for all occasions. A beautiful, rich liver chestnut with an attractive full mane and tail, she loves the fact that she can still turn heads and strut her stuff in the arena. A veteran of all three affiliated competition disciplines, Dinah knows a thing or two but absolutely refuses to tolerate unbalanced riders – even on a hack – but she’s rather fond of the gawping youngsters who regularly spook into her whenever they see a dragon!
Her stable is a room with a view and her paddock allows unrestricted observation of all the comings and goings in the busy yard as befits her status. This week Dinah observes ...The Pony Club Camp!

If I was ever given the choice of coming back to this world for a re-run, I think I would choose to come back as the much beloved 12.2hh pony of a 10 year old little girl. One who was a member of a large Pony Club Branch and who enjoyed all that entailed.
Last week we were invaded by just that, hordes of ponies of every colour and type and hordes of little girls (plus some boys) for their annual Pony Club Camp.

The invasion started quietly enough with the arrival of dozens of trailers driven by some stressed looking Mums. They had that look of near exhaustion, of having been up since the crack of dawn trying to organise just what might be needed at Camp and in the end putting everything bar the kitchen sink in, now realising they have to now unpack it all and that they had in fact forgotten two girths and a martingale.

I decided it was a picture of complete but happy chaos, with small children running up and down the yard looking to find if their pony was going to be next door to their’ bestie’, of tiny people trying to lug giant tack boxes and buckets, invariably to the wrong places and then sitting down in a sulk and refusing to help the now even more frazzled Mum to settle in their pony.

Goodness knows how the mothers of siblings coped. I imagine it is a total logistical nightmare where either large quantities of alcohol and/or tray bakes of rocky road are a must to help ease the week along. That probably explained why I could hear what I’ve learned is the clink of the odd wine bottle, hidden discreetly amongst a bag of spare jodhpurs and underwear; they apparently call it a little something to help numb the senses at the end of the day for those Mums brave enough to have volunteered to stay overnight. 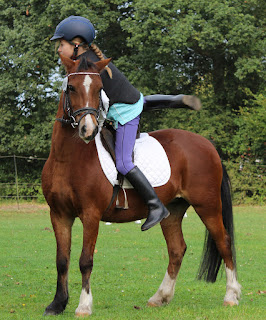 But what FUN these little troopers and their ponies had over the following week. The sound of riotous laughter was a daily occurrence. Usually following some poor unsuspecting person falling into a pile of poo or strangely becoming soaked by water. I was soon reminded that water still plays a vital role at camp, as it always has. Water fights, with or without slides, being the main source of amusement at the end of every day. That explained the copious quantities of ‘spare clothes’ required.

The actual riding activities looked great too; there seemed to be lots of galloping about in wide open fields and not always under the strictest control of the ever-so patient and mostly smiling, albeit through sometimes gritted teeth, instructors. When I and my turnout pals joined in, we were definitely NOT popular because those ponies with a sense of humour immediately gate-crashed our party and things were a bit too exciting briefly. I just stuck my head in the grass and wandered off ...

Next day they were in the arena in groups and there always seemed to be ‘that’ child who had selective hearing. The one who never heard “take the grid in trot” – who charged at said grid like ‘The Light Brigade’ leaving the Instructor turning a very of strange colour of grey and speaking in a voice that had gone up a squeak or two.

It seems to take a special type of Instructor to last the three to five days of Pony Club Camp. Many fall by the wayside suffering a variety of ailments. Usually sunstroke with dehydration, brought on by the fear of taking too much fluid on board so that their bladders might not last the duration of the riding sessions – Portaloos are a scarce commodity out in the farthest-flung fields but I still don’t understand why humans need a small box???

In previous years here, some instructors have succumbed to what they call “hypothermia with trench foot” at those rainy camps, but not this year! Also sudden attacks of Laryngitis are common, especially to those who have a troop of would-be Pony Racers. Most instructors though are a hardy bunch who always seem to thoroughly enjoy the whole week. Rising to the challenge of keeping all things ‘PC’, Health and Safety aware and most of all, everyone from parents and Committee members  to children and ponies happy.

Yes, it was a delightful week to observe, so much love and enthusiasm that only ‘horsey’ folk will understand. It seemed, as it always does, that each and every one just immersed themselves into the joy that is a child and their pony. Roll on next year’s Camp - and can I join The Pony Club please?

To receive Dinah's updates straight to your inbox, add your email address to the 'Follow By Email' box above right and click Submit.
Posted by Equine extra at 11:00